Seems we’ve had two substantial cold fronts over the last two weekends. While it should serve to drive the flounder and grouper into our bays, it makes for challenging fishing conditions. It’s been a little hit and miss for me. A small snook here, a flounder there, and a few small grouper and snapper mixed in. The highlight was last Saturday, when at least 20 keeper flounder were landed at Merry Pier, along with some smaller throwbacks. There were even a few slot and oversize redfish in the mix. 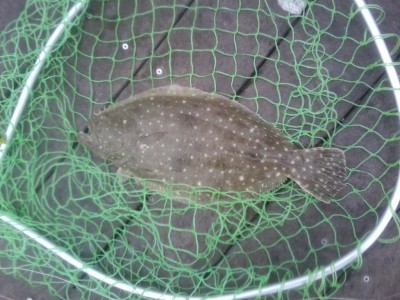 Posted in General | Comments Off on Cold Front Fishing 2014

Snapper are moving out – fast. We managed a dozen or so this weekend, with a single legal fish. That’s OK, though. As the water cools, the fishing is changing rapidly. I got a nice 15 pound black drum over the weekend. Great eating – just like redfish, if you remember to remove the bloodline.  And my brother landed a quality 28″ gag grouper. There were plenty of short grouper too, along with a few small snook, and a couple of short flounder. Bait was abundant and large on Saturday, but had mostly moved out Sunday. that’s how quick things can change this time of year!

The big surprise came Sunday as Roger was using a Sabiki rig for pinfish. He got a few Lane snapper, then, lo and behold, a YELLOWTAIL SNAPPER! First one I’ve ever seen in Boca Ciega Bay in St. Pete Beach. You never know what fishing here will bring. 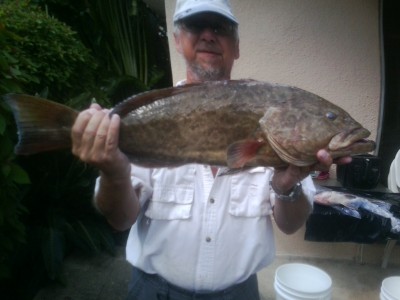 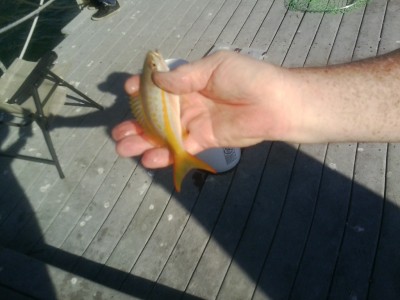 Fall Fishing is Upon Us!

Wow = almost October. Yes, I’ve been a little lax in updates, but it has been because of my crazy schedule, and not from a lack of fishing. In fact, I’ve managed to wet a line at least a few hours every weekend since my last update. At the Merry Pier, the story has been snapper. Snapper, snapper and more snapper. Big ones, medium ones and a few little ‘uns. Most days I have managed a limit of big ones (12″ to 18″ fish) after 2-3 hours of fishing. But, over the last couple of weeks, the snapper bite has started to cool off. They’re still around, and some are really big, but they’ve slowed down and thinned out as the migration offshore has begun. I suspect there will be a few lingering for the next few weeks.

There is still a ton of bait around, mostly still small stuff. Pinfish and spotail pins are making there presence felt for anyone using shrimp.

Cobia are around, and while not reliable, I have seen at least one caught every weekend. So far, Juan scored the only keeper; most are running 25″ to 32″.

Gag grouper are picking up. I am still hunting my first keeper of the season, but I’ve landed lots of shorts. And I have seen pictures of quality fish to 30″ from the last week or two,

I am optimistic about flounder season, which is just a cold front or two away. Lots of flounder have been showing, but they’re all running very small. A good front, one that drops the water temperature by at least a couple degrees should bring the big fish inshore. 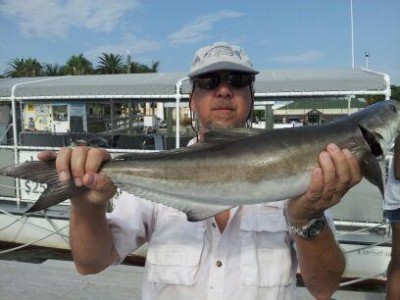 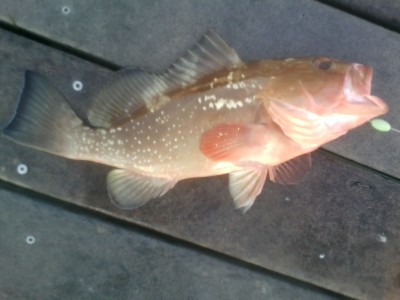 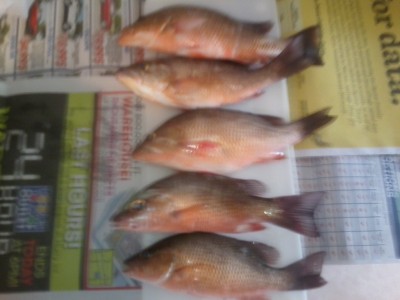 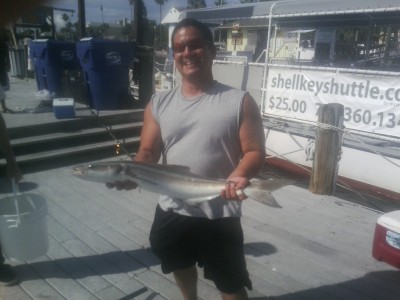 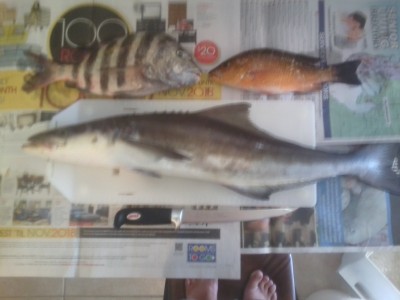 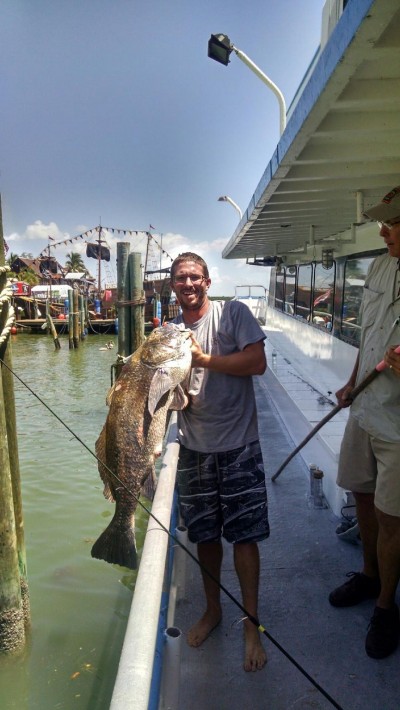 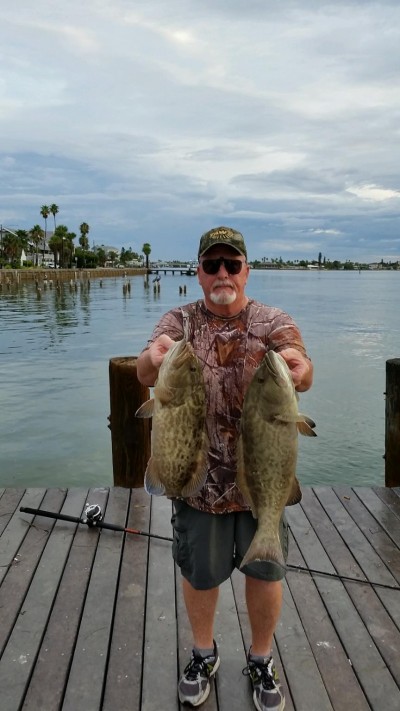 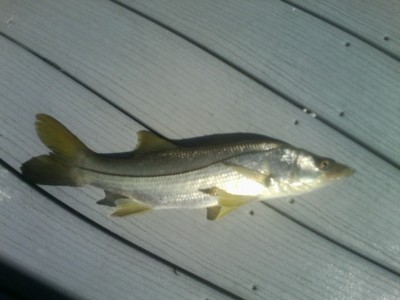 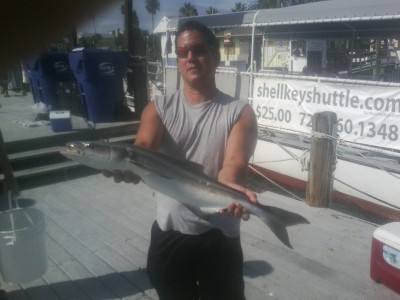 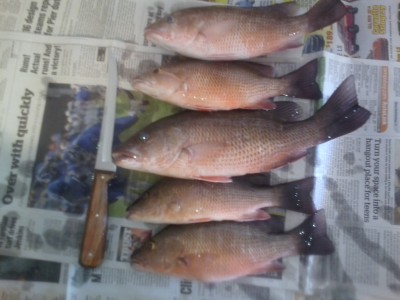 Posted in General | Comments Off on Fall Fishing is Upon Us!

I love this time of year! Big snapper are everywhere, and they’re hungry. I catch most of mine at the Merry Pier in St. Pete Beach, Florida. Here’s how:

Tackle: I use a Star rod and Penn reel spooled with 25 lb. Spiderwire. Terminal tackle consists of a 2 foot section of 30 pound fluorocarbon leader, a #1 offset circle hook, and a swivel. Above the swivel is a sliding egg sinker – the size depends on the current at that time. Be aware that there may be other fish lurking among the mangos, including redfish, snook, grouper, flounder and black drum, so better to be prepared just in case.

Bait: Live shrimp. The bigger, the better. I have had good luck with whitebait, greenbacks and silver Jenny’s, but nothing beats a live shrimp, hooked through the horn so it can kick freely. If the water is murky, I may tail hook them.

Techniques: Snapper love moving water. Incoming or outgoing tide doesn’t seem to matter, although high tide is better than low tide. Keep in mind that the snapper will be facing into the current, so float your shrimp back to them. They may be underneath the Pier, anywhere from the seawall out to the end, and they can also be found among the rocks and structure on the northeast side of the Pier.

The Payoff: You are allowed to keep up to five mangrove snapper per person, per day. The minimum size is 10″ overall (yes, you can ‘pinch’ the tail), but I suggest throwing back anything less than a foot. There are plenty pf smaller fish, but the big ones are there too. I have limited out every weekend for the last month, with 12″ to 18″ fish. Mangrove snapper are excellent blackened, fried, and sauteed. They freeze well if you have a vacumn sealer (and you should have one). 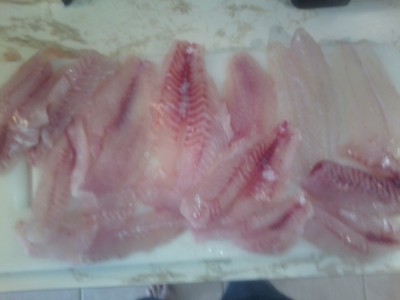 Posted in General | Comments Off on Tampa Bay Snapper Fishing 2014

Amazing drone footage of Pass-A-Grille and the Merry Pier from Tim Healy, a professional photographer in Tampa.

Snapper continue to dominate the fishing picture as we approach August, 2014. Snook are thick under the pier and by the seawall, but they are currently out of season. Grouper are around, but not in abundance. Juan wrestled in a 21″ gag last weekend, an encouraging sign. The bait is getting bigger each week. A few recent photos: 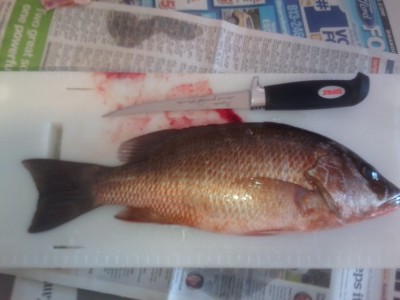 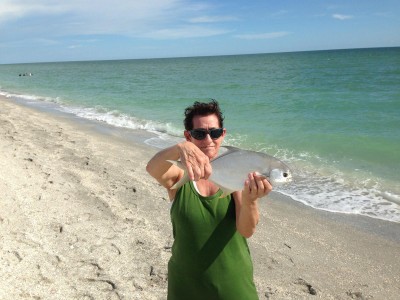 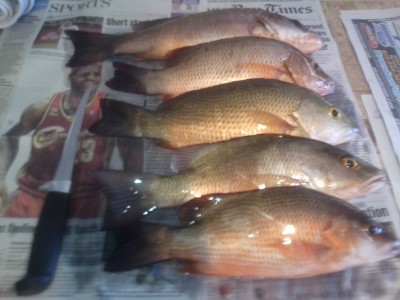 Posted in General | Comments Off on Merry Pier Aerial Views

Despite my best efforts, Independence Day weekend yielded no grouper. I did have a few hits, but couldn’t connect. The biggest obstacle was a ripping outgoing tide at sunrise. Maybe next weekend….

Meanwhile, the mangrove snapper bite is still on fire. Targeting them at The Merry Pier in St. Pete Beach, I caught and released them by the dozens, keeping only a few 12″ to 15″ fish. Bait is thick, but still really small. I soaked a pinfish in the Pass-A-Grille Channel in hopes of a cobia, but no dice.

Posted in General | Comments Off on Snapperfest 2014 Continues

June turned out to be a fantastic month for mangrove snapper fishing in St. Pete Beach. The run started early, and the fish were big – and hungry! As usual, live shrimp proved the best bait, although some nice ones have been taken on micro-greenbacks and small pinfish. There have been some quality fish, in excess of 15″ and three pounds, and there have been plenty of 8″ to 12″ mangos as well. Last weekend, I managed over a hundred between me and my fishing buddies, although we only kept the largest ones. Remember, 5 fish per person, and a minimum size of 10″ overall.

Next up – gag grouper season, which begins today. I’ll be after them hard over the long holiday weekend, and should have a report next week.

Posted in General | Comments Off on Snapper, Snapper, and More Snapper

Fishing is Getting Hot!

As the Gulf and bay water temperatures slowly rise, the fishing is picking up nicely. This is a great time of year to wet a line, as you never know what might be biting. I have been spending weekends wrangling redfish, mangrove snapper (some nice ‘uns, too), sheepshead, black drum and grouper in St. Pete Beach and the Pass-A-Grille area. Redfish are in the passes at high tide, and tarpon are basking in the shallow bays on calm days.

A few ‘catching up’ pictures: 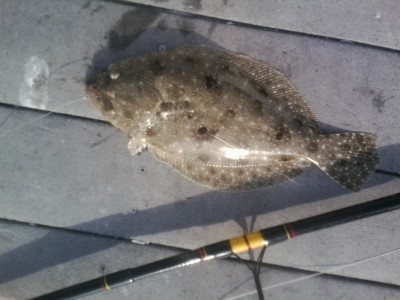 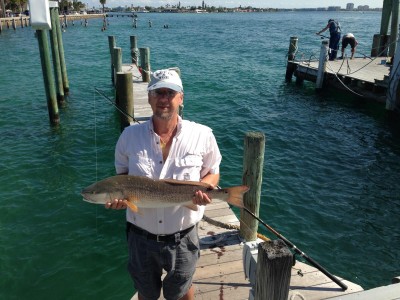 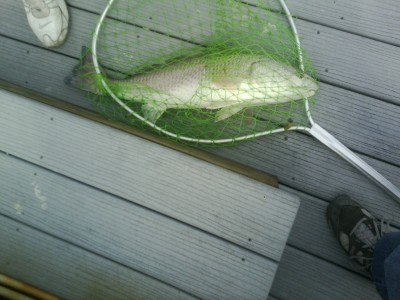 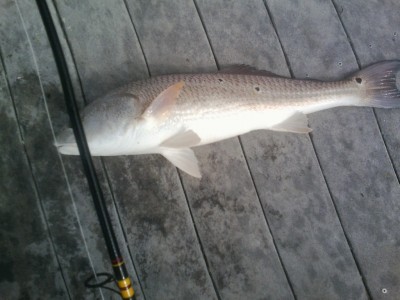 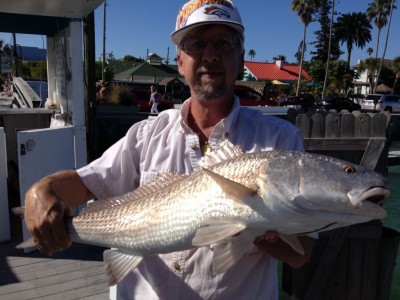 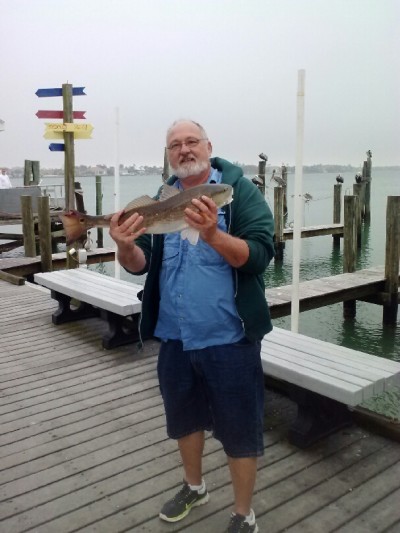 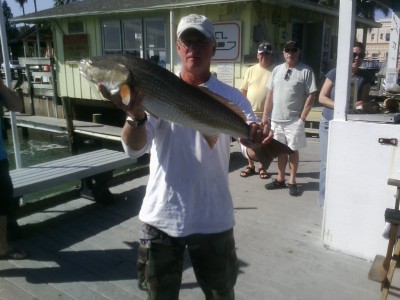 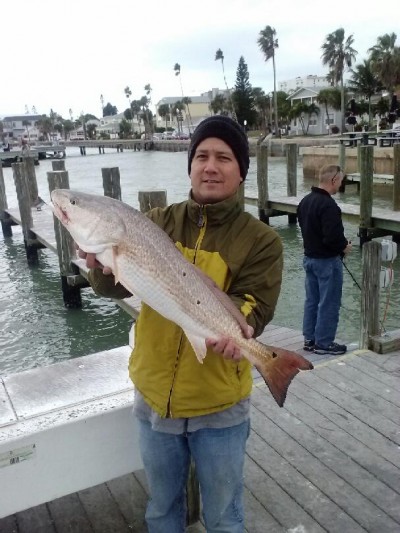 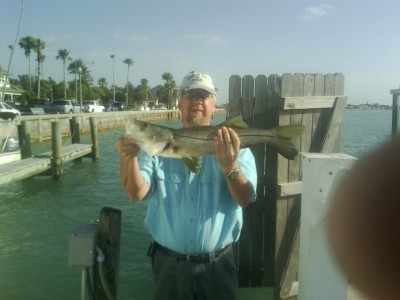 Posted in General | Comments Off on Fishing is Getting Hot!

Fishing has been slow but steady the last couple of months. The redfish run lasted until early March, when the schools that had been haunting Merry Pier dissipated – probably over to Shell Key and Ft. Desoto. But the black drum are still here, and biting. A 5 pound black drum, blackened in a cast iron skillet with Cajun seasoning, is just as tasty as a redfish!

No sign of bait yet, although there are glass minnows and fry appearing. Under the pier, giant snook are cruising, but they have lockjaw. Imagine that! Every now and then somebody will pull up a small flounder or porgy. Macks are making an appearance when the current is running strong. And sheepshead are back and biting, including a monster 5 pounder last weekend.

So far, no sign of mangrove snapper. Once the bait shows, they won’t be far behind. There are rumors of pompano in the Passes and at the Jetty. And, with grouper season closed until 7/1, nobody is targeting them (although I suspect they are hanging out in the usual spots). Cobia may be here, but, again, no one is targeting them… yet. A couple of weeks ago, I watched two 100+ pound tarpon hanging out and sunning themselves on the surface at McPhearson Bayou. That’s the earliest I can recall seeing them – and it bodes well for summer 2014 fishing in the Tampa Bay area!

Posted in General | Comments Off on Tampa Fishing – Spring 2014

Sorry for the slow pace of updates – been pretty crazy. But the good news is – I HAVE been fishing! Spent a few days in Key West (report to follow), but otherwise, I have been hanging out on Merry Pier in St. Pete Beach. Believe it or not, as of 1/13/14, there is still bait to be netted at the Pier – very unusual that it is around this late. A few snapper are still hanging around.  For a couple of weeks, there were big black drum lurking among the pilings, and we landed a bunch from about 5 to 15 pounds. It was a slow flounder season – the anglers targeting them caught a few, but no banner catches, just a few here and there.

The big story is – REDFISH! For the last few weeks, when the water was clear, you could see them cruising at the bottom of the boat slips. Most were right at the top of the slot size, with a few bruisers mixed in. And I have the pictures to prove it: 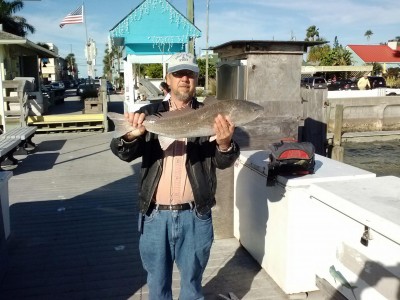 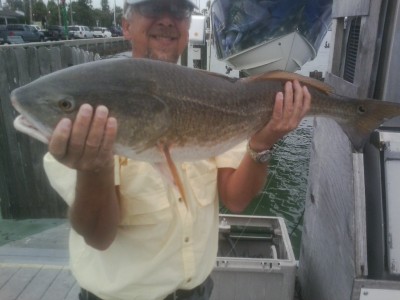 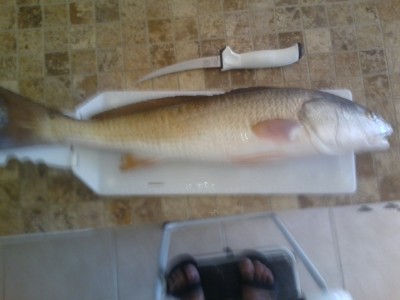 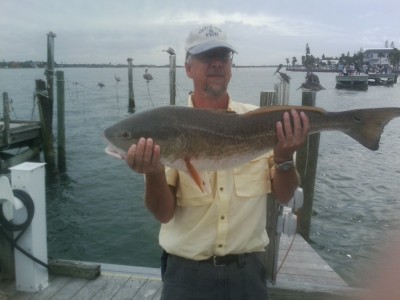 Posted in General | Comments Off on Tampa Fishing 2014